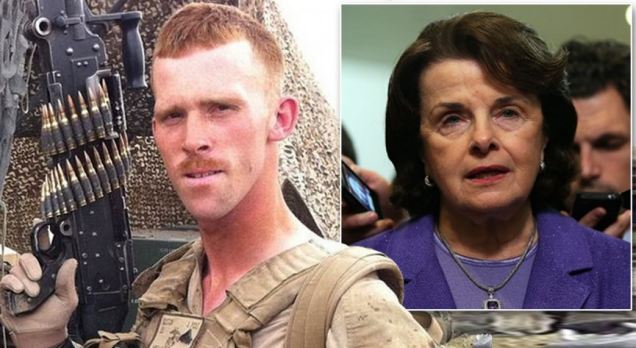 "You ma’am have overstepped a line"

A letter written by an 8-year Marine veteran to U.S. Senator Dianne Feinstein, the architect of the comprehensive 2013 Assault Weapons Ban, has gone viral.

The author of the letter, Cpl. Joshua Boston who was deployed to Afghanistan between 2004-05, told CNN that he opposes gun registration because it will lead to confiscation. Moreover, that passing more gun control laws will only serve to disarm law-abiding citizens, leaving them defenseless.

“I own the guns I own because I acknowledge mankind’s shortcomings instead of pretending like they don’t exist. There are evil men in this world and there just may be a time when I need to do the unthinkable to protect me or my family,” Boston said.

Here is the letter Boston wrote, courtesy of CNN’s iReport:

I will not register my weapons should this bill be passed, as I do not believe it is the government’s right to know what I own. Nor do I think it prudent to tell you what I own so that it may be taken from me by a group of people who enjoy armed protection yet decry me having the same a crime.

You ma’am have overstepped a line that is not your domain. I am a Marine Corps Veteran of 8 years, and I will not have some woman who proclaims the evil of an inanimate object, yet carries one, tell me I may not have one.

I am the man who fought for my country. I am the man who learned. I am an American.You will not tell me that I must register my semi-automatic AR-15 because of the actions of some evil man.

I will not be disarmed to suit the fear that has been established by the media and your misinformation campaign against the American public.

We, the people, deserve better than you.