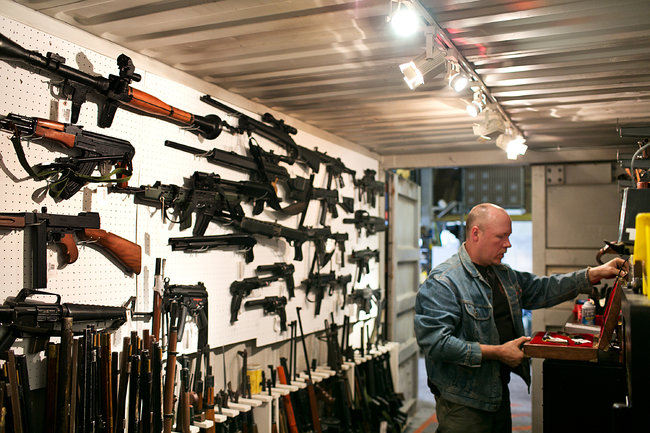 Some New Yorkers whose livelihoods depend on the film industry are worried that lawmakers are not taking the issue seriously enough, and are not comforted by general reassurances from politicians.

Bohdan Bushell, a special effects coordinator at J & M Special Effects in Brooklyn, which supplies firearms for independent films and Broadway shows like “The Phantom of the Opera” and “Jersey Boys,” said any uncertainty could drive studios to move out of state. “If a producer has to jump through more flaming hoops than they already do to shoot in this crazy city of ours, they’re going to go: ‘When is too many hoops? Is this the last one? Am I done now?’ ” Mr. Bushell said. “California is hungry for our work,” he added. “The Southern states with huge tax incentives — Louisiana springs to mind — have very little problem with whatever form of firearm you’d like to carry around with you.” Industry officials said they tried to warn Mr. Cuomo’s office, as it was drafting a gun control bill, that the legislation could affect the film and television production.

They were joined by Mr. Bloomberg’s office, which says it told the governor’s office, before the gun measure was passed, that the movie and television industry was concerned. Mr. Bloomberg has been a vocal critic of assault weapons, but was willing to accommodate the film industry because “almost all theatrical guns are inoperable and their display is limited to production sets,” according to a spokesman, Mark Botnick. “We are concerned with real guns that can be used to kill innocent people, not equipment used on production sets by actors,” he said.

The bill was passed rapidly: Mr. Cuomo, a longtime gun control supporter, was eager to move when public outrage was high, because, he said, that was the only way to get the Legislature to act on the issue. The Legislature moved so fast — the Senate approved the measure on its first day in session, and the Assembly on its second — that few lawmakers, and almost no one in the public, had time to read, digest or debate the details.

“There was no chance for anybody to weigh in — like, ‘Hey, you forgot to take this into account,’ ” said Tom J. O’Donnell, the president of the Theatrical Teamsters Local 817, which represents transportation workers, casting directors and commercial location managers. Now industry workers are pleading for elected officials to take a second look. Mr. Washburn, the theatrical armorer, said he had already made two trips to Albany and had spoken to at least 20 lawmakers as well as aides to the governor.

Mr. Washburn, who recently finished filming “A Walk Among the Tombstones,” a movie starring Liam Neeson, at Green-Wood Cemetery in Brooklyn, said Albany lawmakers should not underestimate how quickly one of the state’s most prosperous industries could shrink. “Our generators are on wheels, our carts are on wheels, our trucks are on wheels,” he said. “Everything is on wheels, and it goes where it’s wanted.”