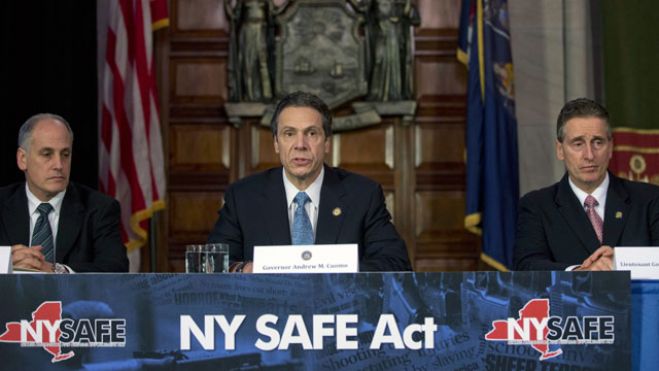 ALBANY, N.Y. – Days after calling for an overhaul of gun control in New York following the Connecticut school shooting, Gov. Andrew Cuomo worked out a tough proposal on gun control with legislative leaders who promised to pass the most restrictive gun law in the nation.

The measure passed the Senate 43-18 on the strength of support from Democrats, many of whom previously sponsored the bills that were once blocked by Republicans. The Democrat-led Assembly gaveled out before midnight and planned to take the issue up at 10 a.m. Tuesday. It is expected to pass easily.

"This is a scourge on society," Cuomo said Monday night, one month after the Newtown, Conn., shooting that took the lives of 20 first graders and six educators. "At what point do you say, `No more innocent loss of life."'

"It is well-balanced, it protects the Second Amendment," said Senate Republican leader Dean Skelos of Long Island. "And there is no confiscation of weapons, which was at one time being considered.

"This will be the toughest gun control package in the nation," said Sen. Jeffrey Klein, leader of the Independent Democrat Conference that shares majority control with Republican senators. "All in all, it is a comprehensive, balanced approach that will save lives," Klein said in an interview.

Cuomo said he wanted quick action to avoid a run on assault rifles and ammunition as he tries to address what he estimates is about 1 million assault rifles in New York state. He made it a centerpiece of his progressive agenda in last week's State of the State address.

Republican Sen. Greg Ball called that political opportunism in a rare criticism of the popular and powerful governor seen by his supporters as a possible candidate for president in 2016.

"We haven't saved any lives tonight, except one: the political life of a governor who wants to be president," said Ball who represents part of the Hudson Valley. "We have taken an entire category of firearms that are currently legal that are in the homes of law-abiding, tax paying citizens. ... We are now turning those law-abiding citizens into criminals."

The governor confirmed the proposal, previously worked out in closed session, called for a tougher assault weapons ban and restrictions on ammunition and the sale of guns, as well as a mandatory police registry of assault weapons, grandfathering in assault weapons already in private hands.

It would create a more powerful tool to require the reporting of mentally ill people who say they intend to use a gun illegally and would address the unsafe storage of guns, the governor confirmed.

Under current state law, assault weapons are defined by having two "military rifle" features spelled out in the law. The proposal would reduce that to one feature and include the popular pistol grip.

Ammunition magazines would be restricted to seven bullets, from the current 10, and current owners of higher-capacity magazines would have a year to sell them out of state. An owner caught at home with eight or more bullets in a magazine could face a misdemeanor charge.

In another provision, a therapist who believes a mental health patient made a credible threat to use a gun illegally would be required to report the incident to a mental health director who would have to report serious threats to the state Department of Criminal Justice Services. A patient's gun could be taken from him or her.

The legislation also increases sentences for gun crimes including the shooting of a first responder that Cuomo called the "Webster provision." Last month in the western New York town of Webster, two firefighters were killed after responding to a fire set by the shooter, who eventually killed himself.

Legislators wouldn't comment on the tentative deal or the provisions discussed in closed-door conferences.

"It's a tough vote," said Senate Deputy Majority Leader Thomas Libous of Broome County. "This is a very difficult issue depending on where you live in the state. I have had thousands of emails and calls ... and I have to respect their wishes." He said many of constituents worry the bill will conflict with the Second Amendment's right to bear arms while others anguish over shootings like at Newtown, Conn., and Columbine, Colo.

A vote Monday would come exactly one month after a gunman killed 20 children and six educators inside Sandy Hook Elementary School in Newtown.

The closed-door meetings prompted about a dozen gun workers to travel more than two hours to Albany to protest the legislation they say could cost 300 to 700 jobs in the economically hard-hit Mohawk Valley.

"I have three small kids myself," said Jamie Rudall, a unionized worker who polishes shotgun receivers. "So I know what it means, the tragedy ... we need to look at ways to prevent that, rather than eliminate the rights of law-abiding citizens."

In the gun debate, one concern for New York is its major gun manufacturer upstate.

Remington Arms Co. makes the Bushmaster semi-automatic rifle that was used in the Connecticut shootings and again on Christmas Eve when the two firefighters were slain in Webster. The two-century-old Remington factory in Ilion in central New York employs 1,000 workers in a Republican Senate district.

Assemblyman Marc Butler, a Republican who represents the area, decried the closed-door meetings by Senate Republicans and the Democratic majority of the Assembly as "politics at its worst."

The bill would be the first test of the new coalition in control of the Senate, which has long been run by Republicans opposed to gun control measures. The chamber is now in the hands of Republicans and five breakaway Democrats led by Klein, an arrangement expected to result in more progressive legislation.

Former Republican Sen. Michael Balboni said that for legislators from the more conservative upstate region of New York, gun control "has the intensity of the gay marriage issue." In 2011, three of four Republicans who crossed the aisle to vote for same-sex marriage ended up losing their jobs because of their votes.