The world's biggest custom working revolver weighs a mere ninetynine pounds has a length of four feet two inches and stands approx one foot four inches from the butt to the top of the hammer.
Below is an image of the revolvers maker Mr. Ryszard Tobys with his super big creation. 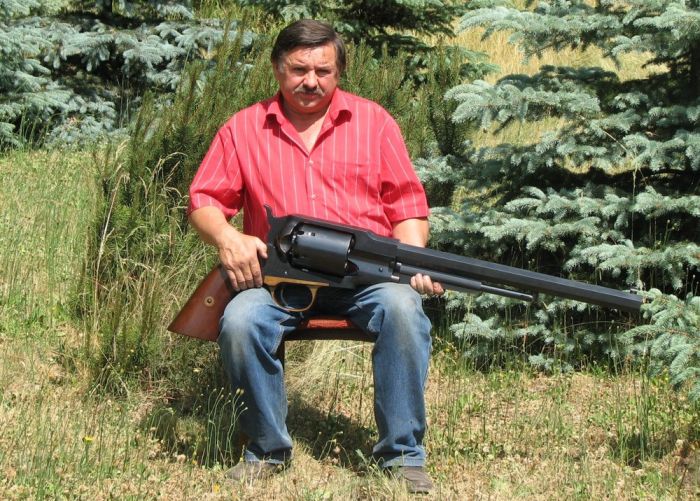 When compared to a normal sized revolver as in the picture below, then this gun is truly a behemoth and one that can only leave you feeling awestruck! Also, check out the size of the 28mm ball shot that it fires!

The revolver is so big that it is impossible to hold up to fire, even with both hands. So it has to be loaded and indeed fired from a bench every time. Below we can see the percussion caps being positioned onto the nipples of the cylinder.

Impracticality overrides any form of usefulness and the revolver is more of a showpiece, a display of skilful engineering than a practical firearm. Something like this though would be great for educating groups of people on how historic black powder firearms were used. So from the point of view of education and history, then its a big thumbs up.

This exhibition revolver would be one hell of a talking piece and presumably a big crowd puller too. The revolver has now been encased in a glass display box and can be seen at trade shows and gun fairs. When or if this revolver does a tour of the U.S.A or U.K, I will try to get any dates and post them up because it would be well worth the trip to go see this marvel of fine tolerance, scaled up engineering.

The revolver is a fully working, exact scaled-up copy of an 1858 Remington New Model Army, black powder revolver. It can be loaded and fired in exactly the same way as the original except that the revolver needs to be supported on something substantial like half a log before it can be fired.

The recoil that the revolver delivers can only be estimated to be quite noticable, as no actual information of this has been detailed? The fact that this is a black powder firearm though would suggest that the recoil would not be enough to throw the gun into the air or off the bench but would rather just buck back a few degrees, held in situ by its weight.

The revolver was constructed by Ryszard Tobys, pictured above and below, of Czempin, Poland. The revolver was successfully test fired on July 15th, 2002, whilst resting the end of the muzzle on half a log...as you do! As stated earlier though, sadly there is not a lot of information on the results. If Mr. Ryzard Tobys would like to contact me though and furnish me with the details then this would be great.

The revolver has some amazing ballistic specifications with its caliber of 28mm of which is just over one inch! and each of the massive ball shot weighing 2,056 grains (4.7 oz) Most normal sized .44 caliber revolvers bullets weigh about two hundred grains by comparison, so therefore this revolver is ten times bigger. The charge of black powder is also ten times bigger at 22grams instead of 22 grains.

I must remind you here that this is a copy of a historic black powder cap ' n ' ball revolver. Black powder revolvers had no cartridges to load up, instead the revolver was loaded by first charging up each of the cylinders six apertures with black powder, the ball (bullet) was then positioned on top of each charged cylinder aperture and was then pressed down by the ramrod under the barrel. A percussion cap was then placed on the firing nipples on the end of the cylinder and finally the hammer was manually cocked to fire the piece.

It was a long drawn out process to load these revolvers, the 1858 Remington New Model Army however, had a quick release cylinder and shooters used to carry preloaded cylinders that they would change over when the gun was empty. They could do this in seconds too, just as fast as modern day shooters load up a revolver with a speed loader.

Despite what has been said about this revolver on several other websites...For a start it is copy of an 1858 Remington New Model Army, it is not an 1859 Navy, it is not a Nitro Express, it is not a Colt Navy or a whole host of other misinformed things that I have seen on the net. Also and more importantly for all gun enthusiasts...

I wish authors of websites would do all the research before blindly posting up incorrect information. During extensive research and cross referencing, I have discovered so much disinformation, myth and total balony purported as truth on the internet that it defies belief. Even in books and magazine articles, I have discovered incorrect, apparently made up information about articles, it is truly annoying to say the least.

Consequently, I have seen several webpages on the internet stating that the revolver featured on this page as a Pfeifer Zeliska 600 Magnum revolver..it most definitely IS NOT. If you do not know what you are talking about then PLEASE do not publish disinformation and do your research before posting up absolute tripe!

I often try to contact the originator of the article that I am creating the webpage about, like I did when featuring Pfeifer Small Arms, Smith & Wesson and Colt to name but a few. I like to offer a guarantee to my visitors of one hundred percent or at least ninetynine percent accurate information.

If I am not sure of some information, then I research and cross reference it and even try to contact the originator of the item in question. Hence I publish ipso facto information, not my best guess information. It annoys me when others don't do the research because they are just too damned lazy.

Information off my website can be confidently used in schools, colleges, lectures and for general reference. I also encourage visitors to write in if they find any typos or errors so they can be amended...this is rare by the way at about half of one percent.

As far as my extensive research can deduce, it was a completely sole effort by Mr. Ryszard Tobys and his great engineering skills. Also and therefore the revolver can officially be designated as a ' Tobys-Remington '

The late Mr. Dwight "Rhyming Rex" Macbeth of Mankota County, Minnesota U.S.A owned a replica of a Colt Peacemaker which is "strung up" at the roadside. It is eight and a half feet long and weighs in at one hundred and seventy-five pounds.

Below is an image of the revolver with Mr. Macbeth standing next to it to give an idea of the guns scale. Quite impressive I'm sure you will all agree.

The revolver was actually created sometime around the late 1940's, it was made from steel and houses wooden grips. It is unlikely that this revolver actually fires though and can therefore only be considered as a big scale model. More information will be sought about this piece and will appear here if and when I can legally source it.

Sadly I have to report that Dwight Rhyming Rex Hoffman Macbeth, passed away July 14th, 2006, from bone marrow cancer. He was seventyone years old, condolences to his family and may he R.I.P 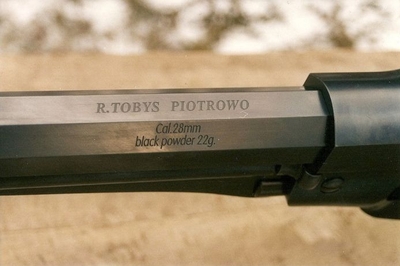 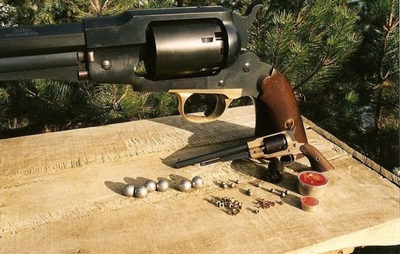 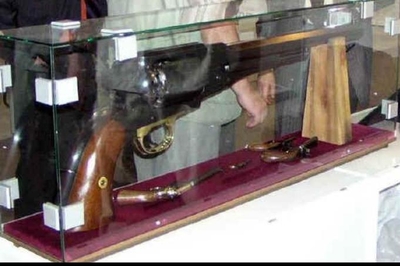 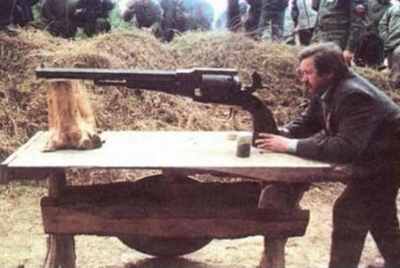 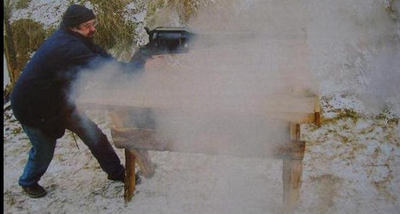 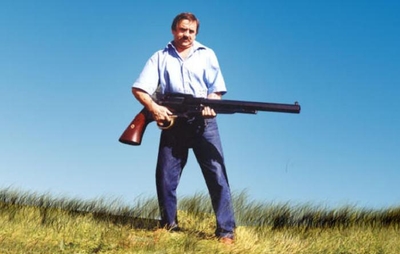