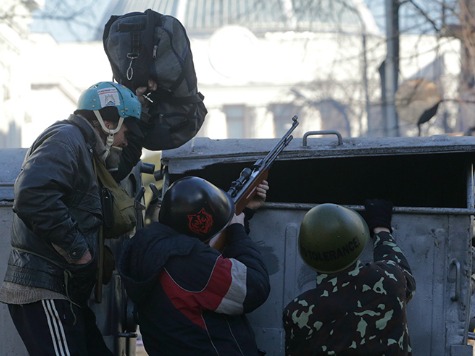 After deadly clashes with government forces for months, demands that new constitutional amendments in the Ukraine include the right for the people to bear arms are growing.

The Ukrainian Gun Owners Association has released a statement saying,

"Today every citizen of Ukraine understands why our country has hundreds of thousands of policemen. Last illusions were crushed when riot police used rubber batons and boots at the Independence Square on peaceful citizens. After such actions we realize that it is not enough to only adopt the Gun Law. As of today Ukrainian Gun Owners Association will start to work on the preparation of amendments to the Constitution, which will provide an unconditional right for Ukrainian citizens to bear arms. People should have the right to bear arms, which will be put in written into the Constitution. Authorities should not and will not be stronger than its people! Armed people are treated with respect"

Gun Owners of America executive director Larry Pratt told Breitbart News, “We should go to the Ukraine, put our hands into theirs and raise them in the air–not letting go–and together call this the ‘Freedom Amendment.’”

Pratt added: “This is freedom’s teeth. And it is another proof that others around the world want what we have here in America. They see and want freedom’s light, even through our own president is doing all he can to dim that light here.”

When asked what the right to keep and bear arms will mean for the Ukrainian people Pratt said: “It means they can protect their lives and property from criminals, as well as from thugs–called the government.”

Colorado Recall founder and Colorado Second Amendment Association board member Tim Knight spoke to the Ukrainian push for gun rights thus: “It’s a guarantee of liberty. That’s what guns are for.”

Knight spoke about how our Founding Fathers had to depend on their arms to cast off a tyranny in the late 18th century. He said, “Now, more than 200 years later, we can pass on this lesson to the Ukrainians–to give up your 2nd Amendment rights is to give away liberty, to secure those rights is to secure liberty.”

The NRA concurred with Knight’s points, stating: “The NRA believes that nations all over should follow the American model and adopt our Constitution and Bill of Rights so their people can live in freedom.”