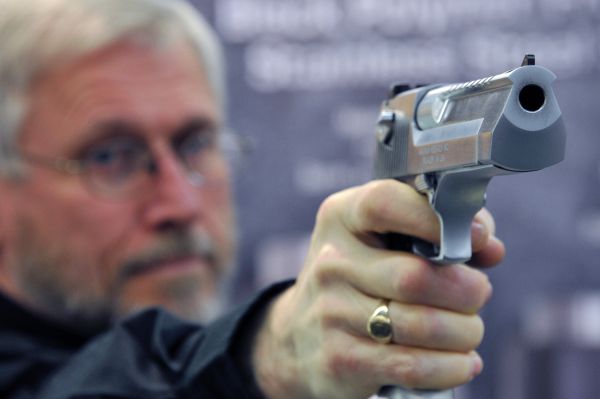 Despite having been − and being currently − manufactured by IMI - Israel Military Industries (today known as IWI - Israel Weapon Industries Ltd.) for economic reasons, the "Desert Eagle" pistol is a quintessentially American gun, having been first conceived by Magnum Research Inc. engineers in Pillager (Minnesota) at the beginning of the 1980s.

Unlike what many may think, the "Desert Eagle" pistol was NEVER conceived as a defensive, duty/service or military/combat pistol, and has NEVER been used as such, anywhere in the world and in any quantity − not even by "Special Forces". The "Desert Eagle" is, as a matter of fact, just too showy, big, heavy and cumbersome to be viable for any kind of defensive or service purpose, and its high-caliber chamberings − .357 Magnum, .44 Magnum, .50 Action Express − make it basically impossible to manage in emergency situations. Furthermore, its low capacity and the difficulty to adapt silencers or sound suppressors to its barrel doesn't make it particularly apt for special applications either.

The "Desert Eagle" pistol has never been anything else but a sporting pistol, specifically conceived for long-range Silhouette shooting or big game hunting − particularly in the United States, where pistol hunting is legal and bear or other big-game hunters need high-caliber pistols to take down their preys. Anyway, the only right way to use a "Desert Eagle" is from a rest, not standing in an odd position like a Hollywood movie hero. That's also why the top portion of the "Desert Eagle" comes with 11mm guides or MIL-STD-1913 "Picatinny" rails for optical sights. 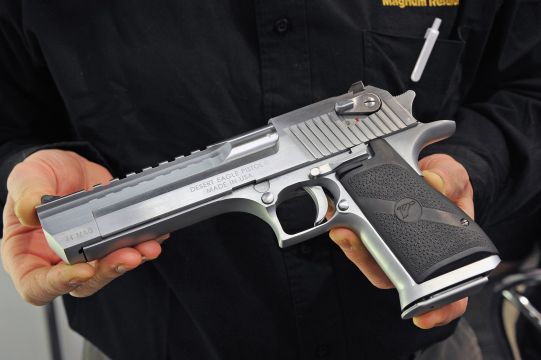 The "Desert Eagle" is available in different barrel lenghts and configurations, and in three calibers

Although this should be enough to bust most of the myths concerning this behemoth of a single-action-only semi-automatic pistol, featuring a slide-mounted safety and today offered with 6" or 10" barrels with or without integral muzzle compensators, it's adamant that the "Desert Eagle" has been an important part of the global gun culture for 25 years us of today. The gas-operated working system, featuring a rotating bolt head in what is basically a miniature version of the M16 rifle bolt group, is also unique in granting solidity and flawless operation even with the hottest .357, .44 or .50 loads.

The Magnum Research Inc. company − now part of the Kahr Firearms Group − showcased the latest "Desert Eagle" pistol variants at the 2014 edition of the IWA & OutdoorClassics expo in Nuremberg. Much like all other Kahr Firearms Group products, the "Desert Eagle" will now be imported in Europe by Ferkinghoff GmbH; its availability in many European Countries has been sketchy at best up to date, but with the appointment of a "centralized" European importer, things should change soon.