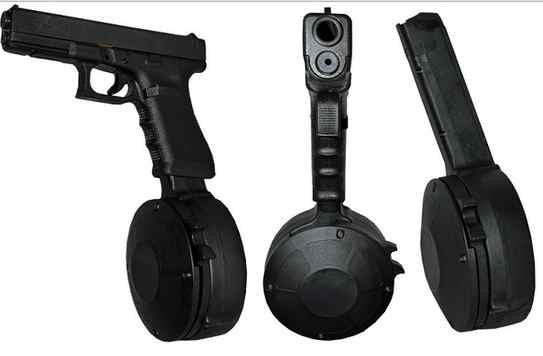 When the Glock 17 was introduced in the 1982, its huge 17-shot magazine gave the pistol an 18-round capability.

For those who want more, there is always the SGM Drum, which holds an entire box of shells.

And that's a fifty round box.

The semi-automatic handgun came out in the late 19th century and almost as soon as it did, drum magazines followed. These rotary spring detachable snail-shells have included the 32-round Luger Pistol Artillery Type of WWI fame, and the classic 75-shot drums of the Thompson 1923. 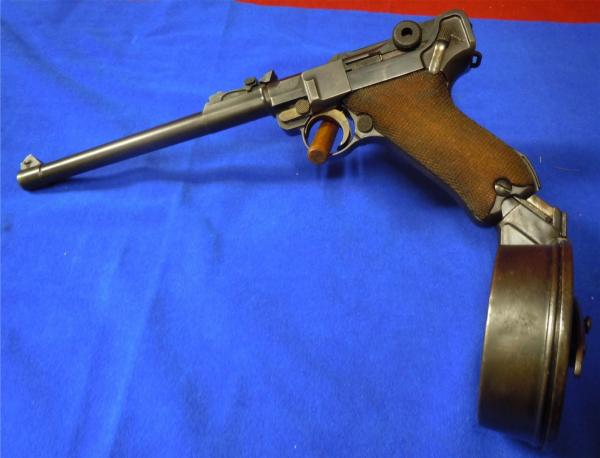 Drum magazines have been around for 100+ years

Since then, manufacturers have made drums that have ranged from the utterly reliable Taylor 29-shot mag for the Colt 1911 to the utterly not Pro Mag 50 for the same gun. The new SGM Tactical 50 for the Glock seems to fall closer to the Taylor.

This new Glock aftermarket extended capacity magazine comes to us new from South Korea. Labeled the SGM 50, it fits all 9x19mm Glocks including the G17, 18, 19, and 26 models, and of course, Just Right and KelTec Sub2000 carbines that take the same magazines. 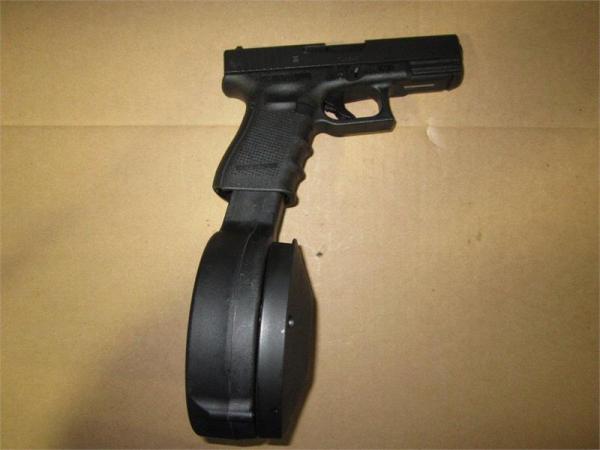 Made by KCI in South Korea, imported and beta test Refinements by SGM Tactical, the drum is DuPont Glass filled Polymer with a Steel Liner-- much like the OE Glock mags themselves. SGM advised that the magazine could be stored fully loaded without damage to spring, which is a handy concept.

Dimensions in inches are 10x5x2.75 with most of the '10' part being inserted into the magazine well of the pistol. The magazine is extremely easy to load using the side ratchet.

SGM also makes 33-rounders for Glocks, 100-round AR drums, as well as mags for Ruger Mini-14s and AK clones so it looks like they have a lot going on. Previous SGM mags for other guns do not have a good history of failure-free functioning, but these new 50-round drums tend to work well. Keep in mind that the magazine is 1.46 lbs unloaded and slightly over 3-pounds when crammed with a box of shells.

Before December 2012 they went for about $69ish. Today they range from $119-$250 from Cheaper Than Dirt, Buds, Sarco, and others even with all of the high-cap mag hysteria now. On Gunbroker a quick look shows them starting as low as $99 and a 3-month search of completed auctions shows them going as high as $180.

With that in mind, shop around if you wanted a little 'extra' drumroll to your Glock 9milly. 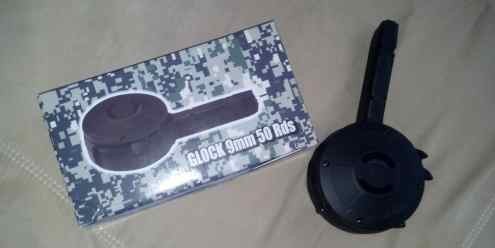