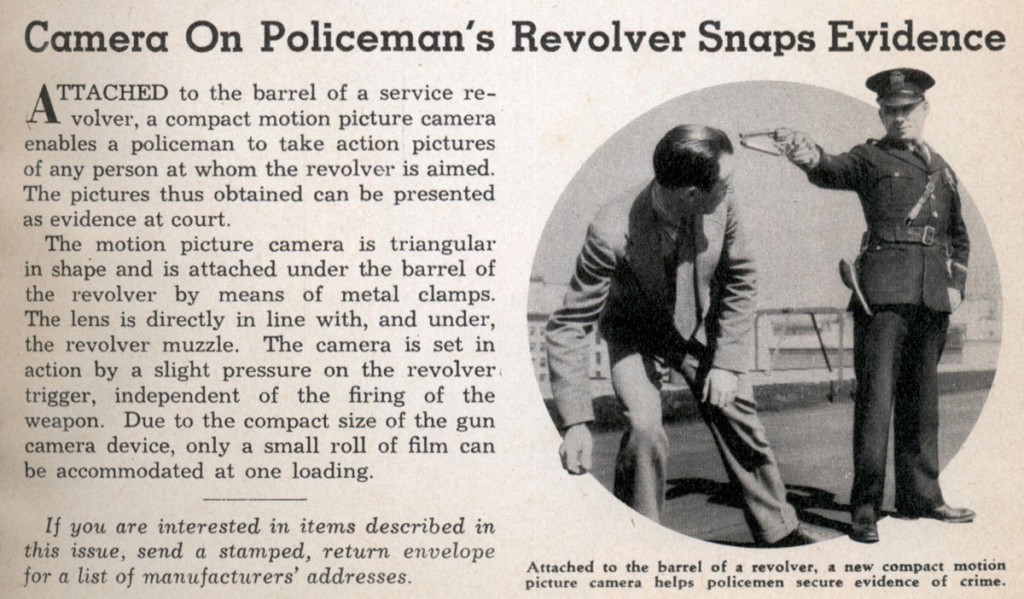 Pull the trigger. Snap a picture. The revolver camera is old, but not as odd as one might think. It may even seem weird and potentially even a little morbid.

Theoretically, the shooter could capture a photo of the target at the moment of impact. But is this technology really as odd and antiquated as it appears, or simply a design a half-century ahead of its time?

Though the revolver camera’s history is pretty blurry, records indicate this contraption was created and photographed in 1938 in New York. The only known surviving photos come from the Nationaal Archief of the Netherlands, where the gun-camera now calls home. What’s not so clear is where the gun came from, whose brainchild it was, and whether its intended use was pure novelty or true invention.

Revolver camera. Pulling the trigger simultaneously fires a round and snaps a picture.

The device itself is a very tiny camera attached to both the underside of the barrel and front of the trigger guard of a Colt .38 special revolver. The camera was somehow configured so that each time the trigger was pulled, a photo was snapped simultaneously. These black-and-white still images of times either just prior to — or more likely just after — impact left something to the imagination, unlike today’s streaming video. No doubt, the revolver camera was lens to which you don’t want to say cheese, smile or wait for the flash.

There’s no evidence that this gun was actually put to use other than for trial photo shoots and practice runs — sans bullets, we assume. Unfortunately, few photos of-and-by the revolver survive today. The only surviving images — the actual camera and the six inset images it snapped — were actually posted on Flickr by the Nationaal Archief in the hopes of gathering more information about the revolver camera’s history. So far, all they’ve gathered are oohs, ahhs, and gun puns. The true history of this novel(ty) idea may never be known. 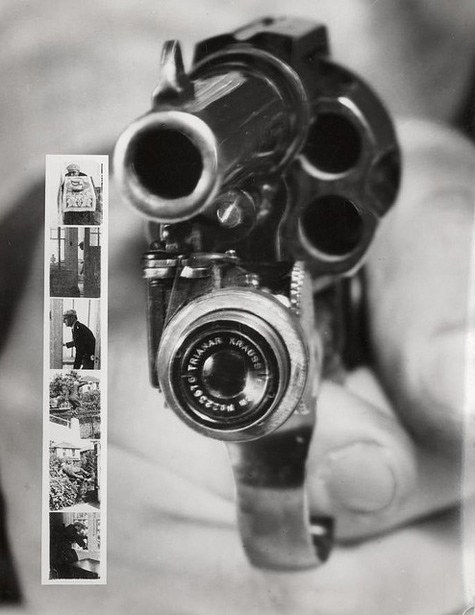 For what it’s worth, the revolver camera was recently voted as one of the 10 most interesting inventions of the past, alongside wooden bathing suits and an amphibious bicycle. Unlike most items on this list, however, the revolver camera is neither a forgotten technology nor an antiquated goof. This one is alive and well today.

Flash Forward: Weapon mounted cameras today Enter the Contour Roam camera, available from most major retailers. This is no snap-trap mechanical Kodak wired into the trigger of an old-school revolver. We’re talking Bluetooth and full-HD. Contour cameras are state-of-the-art digital video recorders available with numerous accessories and attachments to suit any taste, including Picatinny mounts and waterproof housings. Shooters may be more interested in buying the Contour Roam through Daniel Defense — preeminent manufacturer of AR-platform rifles and parts — where they carry all the accessories geared towards the firearms market, allowing the camera to be mounted on the rail, barrel, shooter’s headband, or any other conceivable place. While these will not activate at the pull of the trigger, they are nonetheless well suited to the gun market. Some Contour Roam versions even have GPS capabilities to record location, speed and elevation. Mount it on your barrel for a hunt, then on your tree for a bow stand adventure, or take it to the range for a shooting session. Base models retail around $199, while higher end versions reach $300. Considering the origins of the 1938 revolver camera, we’ve come a long way, baby.

Been There, Done That: The ideal gun cam?

So we have the old point and shoot manual tiny camera. And we have the most newfangled digital video recorder. But is there a middle ground combining the two into something better still? One wonders if there’s a market for tiny digital image cameras easily mounted on say, conceal carry guns or law enforcement duty weapons. If self-defense shots are required, the proof of danger would be right there, recorded with each pull of the trigger. Wouldn’t there be an ideal market for a new weapon-mounted-camera would, like those g-force activated recorders in emergency vehicles, would proceed filming just prior to action? Turns out the answer is, “No.”

Someone’s having a bad day.

This device was already created, sold and fizzled out. It debuted in 2009 and was discontinued a few years later. Burris’ ShotCam was designed specifically for weapons.

It was a rail-mounted video camera with integrated laser and LED flashlight. Given its three-way-capability, it was both bulky and pricy, retailing for $892 and selling initially for $695. Shortcomings aside, Burris is a quality manufacturer, and they had the right idea. The ShotCam’s video function would engage as the pistol was unholstered. It could even be configured to snap still shots during recoil. Though ShotCam found some favor among hunters, it was marketed primarily toward Law Enforcement, where it continues to see some spotty use. The good news is, if the ShotCam trips your trigger, the discontinued piece can be found on super-clearance at online retailers for hundreds less than retail, once even selling for as low as $99. With the right price and size, will we soon see miniscule cameras as stock equipment on factory handguns alongside lasers? I think not.

Perhaps we are getting too advanced for our own good. As for me, I’m happy with shooting my gun and shooting my camera. Separately. At different times. And for different reasons. Still, there’s no denying the footage from any of these cameras would and does create pretty entertaining viewing. I wonder if the developers of cameras like the Contour ever saw the original revolver camera. Perhaps not, but we must at least give a nod to its anonymous developer when we watch stunning gun-mounted footage from 3-gun competitions and solo tree-stand hunts.

Nonetheless, whoever dreamed up that crazy Colt-meets-Kodak so many decades ago was well ahead of the times. The inventor would never have predicted the wild success of go-everywhere cameras. All we are left with is the wondering of which seemingly strange technology will be the next big boom.