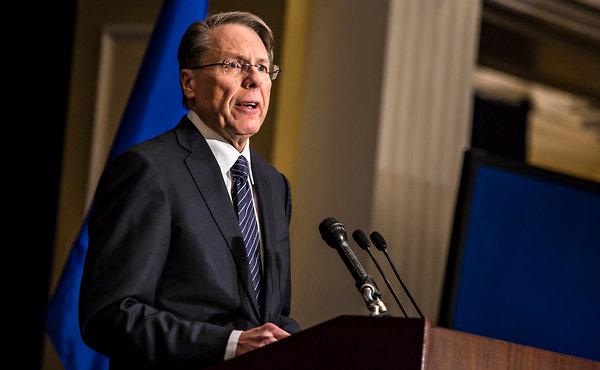 WASHINGTON — After a weeklong silence, the National Rifle Association announced Friday that it wants to arm security officers at every school in the country. It pointed the finger at violent video games, the news media and lax law enforcement — not guns — as culprits in the recent rash of mass shootings.

“The only thing that stops a bad guy with a gun is a good guy with a gun,” Wayne LaPierre, the N.R.A. vice president, said at a media event that was interrupted by protesters. One held up a banner saying, “N.R.A. Killing Our Kids.”

The N.R.A.’s plan for countering school shootings, coming a week after the massacre at Sandy Hook Elementary School in Newtown, Conn., was met with widespread derision from school administrators, law enforcement officials and politicians, with some critics calling it “delusional” and “paranoid.” Gov. Chris Christie of New Jersey, a Republican, said arming schools would not make them safer. Even conservative politicians who had voiced support this week for arming more school officers did not rush to embrace the N.R.A.’s plan. Their reluctance was an indication of just how toxic the gun debate has become after the Connecticut shootings, as gun control advocates push for tougher restrictions.

Nationwide, at least 23,000 schools — about one-third of all public schools — already had armed security on staff as of the most recent data, for the 2009-10 school year, and a number of states and districts that do not use them have begun discussing the idea in recent days. Even so, the N. R. A’s focus on armed guards as its prime solution to school shootings — and the group’s offer to help develop and carry out such a program nationwide — rankled a number of lawmakers on Capitol Hill.

“Anyone who thought the N.R.A. was going to come out today and make a common-sense statement about meaningful reform and safety was kidding themselves,” said Representative Mike Quigley, an Illinois Democrat, who has called for new restrictions on assault rifles. Mr. LaPierre struck a defiant tone on Friday, making clear that his group was not eager to reach a conciliation. With the N.R.A. not making any statements after last week’s shootings, both supporters and opponents of greater gun control had been looking to its announcement Friday as a sign of how the nation’s most influential gun lobby group would respond and whether it would pledge to work with President Obama and Congress in developing new gun control measures.

Mr. LaPierre offered no support for any of the proposals made in the last week, like banning assault rifles or limiting high-capacity ammunition, and N.R.A. leaders declined to answer questions. As reporters shouted out to Mr. LaPierre and David Keene, the group’s president, asking whether they planned to work with Mr. Obama, the men walked off stage without answering. Mr. LaPierre seemed to anticipate the negative reaction in an address that was often angry and combative. “Now I can imagine the headlines — the shocking headlines you’ll print tomorrow,” he told more than 150 journalists at a downtown hotel several blocks from the White House. “More guns, you’ll claim, are the N.R.A.’s answer to everything,” he said. “Your implication will be that guns are evil and have no place in society, much less in our schools. But since when did the gun automatically become a bad word?”

Mr. LaPierre said his organization would finance and develop a program called the National Model School Shield Program, to work with schools to arm and train school guards, including retired police officers and volunteers. The gun rights group named Asa Hutchinson, a former Republican congressman from Arkansas and administrator of the Drug Enforcement Agency, to lead a task force to develop the program. Mr. LaPierre also said that before Congress moved to pass any new gun restrictions, it should “act immediately to appropriate whatever is necessary to put armed police officers in every single school in this nation” by the time students return from winter break in January.

The idea of arming school security officers is not altogether new. Districts in cities including Albuquerque, Baltimore, Dallas, Houston, Los Angeles, Miami and St. Louis have armed officers in schools, either through relationships with local police departments or by training and recruiting their own staff members.

A federal program dating back to the Clinton administration also uses armed police officers in school districts to bolster security, and Mr. LaPierre himself talked about beefing up the number of armed officers on campuses after the deadly shootings in 2007 at Virginia Tech. But what the N.R.A. proposed would expand the use of armed officers nationwide and make greater use of not just police officers, but armed volunteers — including retired police officers and reservists — to patrol school grounds. The organization offered no estimates of the cost. Mr. LaPierre said that if armed security officers had been used at the Newtown school, “26 innocent lives might have been spared that day.” The N.R.A. news conference was an unusual Washington event both in tone and substance, as Mr. LaPierre avoided the hedged, carefully calibrated language that political figures usually prefer, and instead let loose with a torrid attack on the N.R.A.’s accusers. He blasted what he called “the political class here in Washington” for pursuing new gun control measures while failing, in his view, to adequately prosecute violations of existing gun laws, finance law enforcement programs or develop a national registry of mentally ill people who might prove to be “the next Adam Lanza,” the gunman in Newtown. Mr. LaPierre also complained that the news media had unfairly “demonized gun owners.” And he called the makers of violent video games “a callous, corrupt and corrupting shadow industry that sells and sows violence against its own people,” as he showed a video of an online cartoon game called “Kindergarten Killer.”

While some superintendents and parents interviewed after the N.R.A.’s briefing said they might support an increased police presence on school campuses as part of a broader safety strategy, many educators, politicians, and crime experts described it as foolhardy and potentially dangerous. Law enforcement officials said putting armed officers in the nation’s 99,000 schools was unrealistic because of the enormous cost and manpower needed. At a news conference Friday, Senator Dianne Feinstein, the California Democrat who is leading an effort to reinstitute a ban on assault rifles, read from a police report on the 1999 shootings at Columbine High School in Colorado, which detailed an armed officer’s unsuccessful attempts to disarm one of the gunmen. “There were two armed law enforcement officers at that campus, and you see what happened — 15 dead,” Ms. Feinstein said. Ernest Logan, president of the Council of School Supervisors and Administrators, called the N.R.A.’s plan “unbelievable and cynical.” He said placing armed guards within schools would “expose our children to far greater risk from gun violence than the very small risk they now face.

”Officials in some districts that use armed security officers stressed that it was only part of a broader strategy aimed at reducing the risk of violence. But Ben Kiser, superintendent of schools in Gloucester County, Va., where the district already has four police officers assigned to patrol schools, said it was just as important to provide mental health services to help struggling children and families. “What I’m afraid of,” said Mr. Kiser, who is also president of the Virginia Association of School Superintendents, “is that we’re often quick to find that one perceived panacea and that’s where we spend our focus.” In Newtown, Conn., the N.R.A.’s call for arming school guards generated considerable debate among parents and residents on Friday — much of it negative. Suzy DeYoung, a parenting coach who has one child in the local school system, said she thought many parents in town and around the country would object to bringing more guns onto school campuses. “I think people are smarter than that,” she said.