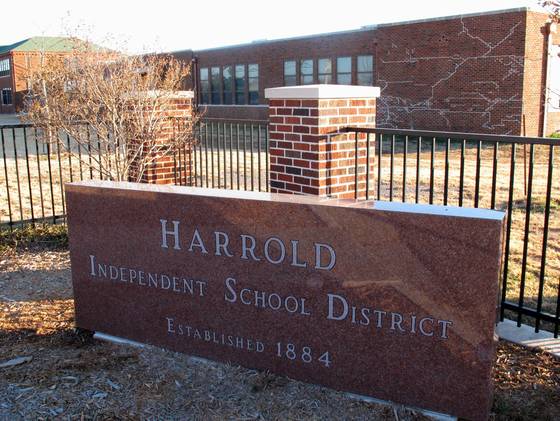 In the tiny Texas town of Harrold, children and their parents don't give much thought to safety at the community's lone school - mostly because some of the teachers are carrying concealed weapons.

In remote Harrold, the nearest sheriff's office is 30 minutes away, and people tend to know - and trust - one another. So the school board voted to let teachers bring guns to school.

"We don't have money for a security guard, but this is a better solution," Superintendent David Thweatt said. "A shooter could take out a guard or officer with a visible, holstered weapon, but our teachers have master's degrees, are older and have had extensive training. And their guns are hidden. We can protect our children."

In the awful aftermath of last week's Connecticut elementary school shooting, lawmakers in a growing number of states - including Oklahoma, Missouri, Minnesota, South Dakota and Oregon - have said they will consider laws allowing teachers and school administrators to carry firearms at school. Texas law bans guns in schools unless the school has given written authorization. Arizona and six other states have similar laws with exceptions for people who have licenses to carry concealed weapons. Harrold's school board voted unanimously in 2007 to allow employees to carry weapons. After obtaining a state concealed-weapons permit, each employee who wants to carry a weapon must be approved by the board based on his or her personality and reaction to a crisis, Thweatt said. Employees also must undergo training in crisis intervention and hostage situations. And they must use bullets that minimize the risk of ricochet, similar to those carried by air marshals on planes.

CaRae Reinisch, who lives in the nearby community of Elliott, said she took her children out of a larger school and enrolled them in Harrold two years ago, partly because she felt they would be safer in a building with armed teachers. "I think it's a great idea for trained teachers to carry weapons," Reinish said. "But I hate that it has come to this." The superintendent won't disclose how many of the school's 50 employees carry weapons, saying that revealing that number might jeopardize school security. The school, about 150 miles northwest of Fort Worth near the Oklahoma border, has 103 students from kindergarten through 12th grade. Most of them rarely think about who is carrying a gun. "This is the first time in a long time that I've thought about it," said Matt Templeton, the principal's 17-year-old son. "And that's because of what happened" in Connecticut. Thweatt said other Texas schools allow teachers to carry weapons, but he would not reveal their locations, saying they are afraid of negative publicity. The Texas Education Agency said it had not heard of any other schools with such a policy. And the Brady Center to Prevent Gun Violence did not know of any other districts nationwide that allow school employees to carry concealed handguns. But that may change soon.

Oklahoma state rep Mark McCullough said he is working on a bill that would allow teachers and administrators to receive firearms training through the Council on Law Enforcement Education and Training, which would authorize them to carry weapons at school and at school events. Other states are proposing or considering similar measures. However, Michigan Governor Rick Snyder this week vetoed legislation that would have allowed concealed weapons in schools, churches and day care centers, saying he seeks a more "thoughtful review" that includes school emergency policies and mental health-related issues. In Texas, guns have an honored place in the state's culture, and politicians often describe owning a gun as essential to being Texan. At the state Capitol, concealed handgun license holders are allowed to skip the metal detectors that scan visitors. Gov. Rick Perry has indicated he would prefer to give gun owners the widest possible latitude. Just days after the Connecticut attack, Perry said permit holders should be able to carry concealed weapons in any public place. Last year, many Texas lawmakers supported a plan to give college students and professors with concealed handgun licenses the right to carry guns on campus, but the measure failed.

Opponents insist that having more people armed at a school, especially teachers or administrators who aren't trained to deal with crime on a daily basis, could lead to more injuries and deaths. They point to an August shooting outside the Empire State Building, where police killed a laid-off clothing designer after he fatally shot his former colleague. Nine bystanders were wounded by police gunfire, ricochets and fragments. "You are going to put teachers, people teaching 6-year-olds in a school, and expect them to respond to an active-shooter situation?" said Ladd Everitt, a spokesman for the Washington, DC-based Coalition to Stop Gun Violence, who called the idea of arming teachers "madness." Kristin Rowe-Finkbeiner said she would not have felt better if teachers at her children's Seattle school had been armed during a May shooting at a nearby cafe. A gunman killed four people at the cafe and another woman during a carjacking before killing himself. The school went on lockdown as a precaution. "It would be highly concerning to me to know that guns were around my kids each and every day. ... Increasing our arms is not the answer," said Rowe-Finkbeiner, co-founder and CEO of MomsRising.org.

Dan Gross, president of the Brady Campaign, said focusing on arming teachers distracts from the "real things" that could help prevent a school shooting "and at worse it furthers a dangerous conversation that only talks about guns as protection without a discussion about the serious risks they present." As the debate continues, Harrold's school plans to leave its policy unchanged. "Nothing is 100 percent at all. ... But hope makes for a terrible plan, hoping that (a tragedy) won't happen," Thweatt said. "My question is: What have you done about it? How have you planned?"