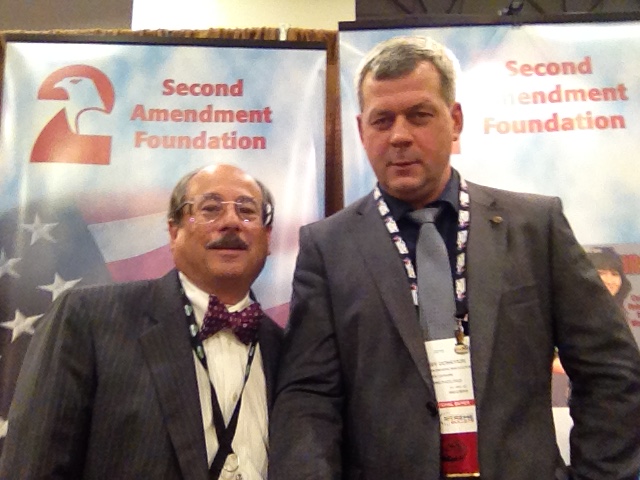 The Second Amendment Foundation today announced that it has started a new working relationship with the Ukrainian Gun Owners Association (GOA), a member organization of the International Association for the Protection of Civilian Arms Rights (IAPCAR), which SAF founder Alan Gottlieb played a key role in creating.

"UGOA's efforts and successes are having a positive impact not only in Ukraine, but cross Europe and the United States as well," Gottlieb observed in an open letter to members of the organization. "Internationally, we greatly appreciate all that you are doing to advance the human right of self-defense."

Gottlieb met with George Uchaykin, chairman of the UGOA supervisory board, and Tony Kovar, the UGOA's United States representative earlier this year at the annual Shooting, Hunting and Outdoor Trade (SHOT) Show in Las Vegas. Representatives of the group are tentatively scheduled to participate in this year's Gun Rights Policy Conference in Tampa, Florida Sept. 23-25.

"I've been very impressed with UGOA's work so far," Gottlieb said. "This is a very active group, and I see a pretty busy future for them in Europe. As one of the premier American firearms rights organizations, SAF is only too happy to offer any support and assistance we can, and I expect they may benefit from our experience in defending the rights of gun owners to help guide them as they make progress in their homeland."

One thing that has already happened, Gottlieb noted, is that UGOA is expanding both the quantity and quality of English language articles published on their website. That site, he revealed, has garnered more than 4.5 million visits annually. Eventually, SAF will be able to post articles and news directly to the UGOA website's English language page.

"I think from a small beginning something big is going to grow," Gottlieb predicted. "We look forward to working with our Ukrainian colleagues for the cause of gun rights on the international stage."

The Second Amendment Foundation is the nation's oldest and largest tax-exempt education, research, publishing and legal action group focusing on the Constitutional right and heritage to privately own and possess firearms. Founded in 1974, The Foundation has grown to more than 650,000 members and supporters and conducts many programs designed to better inform the public about the consequences of gun control.