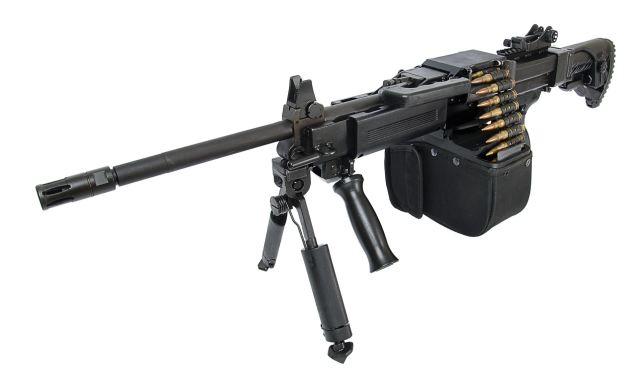 The NEGEV NG7 – the newest in the company’s NEGEV LMG family – is the only 7.62mm caliber LMG in service today with semi-automatic mode, capable of pinpoint, single bullet shooting for enhanced firing accuracy.

The NEGEV NG7 shares almost 80% of its components with its smaller brother, the NEGEV 5.56mm caliber – IWI’s exceptionally successful and reliable LMG – which is deployed in dozens of countries around the world including Israel, and has been combat-proven in several wars and in a number of battle arenas.

The NEGEV NG7 includes a semi-automatic firing mode that enables accurate fire in combat situations, including ambush, Close Quarter Battle (CQB), and when shooting via telescope – and is the only 7.62 with single bullet firing capability. In automatic mode, its rate of fire is over 700 bullets per minute. Exceptionally lightweight (weighing less than 8 kg), it can be fired from a variety of mounts, including special mounts on helicopters, land vehicles, and naval vessels.

Features include a gas regulator for additional power in harsh conditions such as mud and dirt, tritium night sights, picattiny rails for optical and other devices, and four safety mechanisms to minimize unwanted fire. The NEGEV NG7 – which delivers remarkable Mean Time Between Failures (MTBF) and long service life – is drum or belt-chain fed, fires from an open bolt position, and is easily dismantled for maintenance in the field.

According to Uri Amit, CEO of IWI, “The new NEGEV NG7 represents the next generation of NEGEV LMGs – providing improved ergonomics as well as increased component reliability. These advances, together with its unique characteristics, make it the most effective lightweight 7.62 available for infantries. As with all other weapons built by IWI, it was developed together with the Israel Defense Forces (IDF). The close cooperation between IWI and the Israeli army in the development of new weapons – and the testing of these weapons on the battlefield by the IDF – is one of the most important factors contributing to the success of our weapons among armies around the world. The NG7 is already generating interest among our customers, and we have received many requests to test it. We are certain that it will become an important part of our product line.”