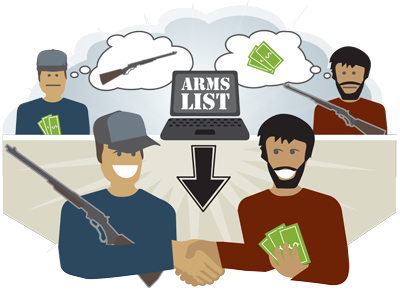 In 2007, US Air Force Academy graduate Jon Gibbon saw a television interview about Craigslist that got him thinking. The online classifieds site had decided to reject ads for firearms, and Gibbon thought he had spotted an opportunity.

"When I heard them say that they decided to ban all gun-related ads because a few users cried out for it, it inspired me to create a place for law-abiding gun owners to buy and sell online without all of the hassles of auctions and shipping," he told Human Events in 2010.

So Gibbon hooked up with his academy buddy Brian Mancini, and two years later the pair launched a website they thought was destined to fill a natural void in the online marketplace: Armslist, a website devoted specifically to the private sales of guns and related gear. The site allows private sellers to offer guns for sale to other private purchasers. Buyers can contact sellers via phone or email to set up the sale, and avoid going through a federal background check or even leaving a paper trail. Such transactions are more anonymous than purchasing a weapon at a gun show, where people who can’t pass a background check can buy large quantities of guns.

Armslist quickly took off. By 2011, it was one of the largest online gun sites in the country, with more than 13,000 active listings for firearms. The site also had another, more dubious distinction: Weapons obtained through the site have been tied to the murders of four people and one suicide. An undercover New York City investigation (PDF) found that the site likely was a major conduit for illegal gun sales. Investigators discovered that 54 percent of the sellers they contacted through the site were openly willing to sell firearms to people who admitted they couldn't pass a background check (which is a felony, incidentally).

Armslist isn't the only online gun site in the country, but it's by far the biggest, especially after KSL.com, a news site owned by the Mormon church, stopped taking gun ads after the Newtown shooting. These sorts of online operations are a primary target of proposals from President Obama that would require background checks for every gun sale, even private ones. When New York City took a look at the online gun marketplace in 2011, it found more than 25,000 weapons for sale on just 10 websites, making the internet a significant component of gun industry. The report suggested that the internet sales were likely tied to a fair amount of crime.

The real numbers aren't known because the Bureau of Alcohol, Tobacco, Firearms, and Explosives does not track how many guns are sold online or how many of them are used in crimes. But gun control advocates suspect the market is large. Jon Lowy, director of the legal action project of the Brady Center to Prevent Gun Violence, says, "The last figure we have is 40 percent of gun sales take place without a background check. That figure is probably low, because it dates from before the advent of the thriving internet market. Today the internet provides a mechanism to facilitate countless private sales without a background check, no questions asked."

Until April 2011, Armslist had operated largely under the radar, attracting attention only from gun enthusiasts. But that spring, Dmitry Smirnov brought the site its first widespread notice. Smirnov was a Russian immigrant living in British Columbia. As a foreigner, Sminrov, then 21, could not legally purchase a gun anywhere in the United States. (Canada's gun laws are even stricter.) But through Armslist, he connected with Benedict Ladera, a 31-year-old Seattle man who sold him a .40-caliber handgun outside a Washington casino. Ladera charged Smirnov an extra $200 because he couldn't prove he lived in the state. Smirnov then traveled to Illinois, and tracked down Jetka Vesel, 36, whom he'd had a brief relationship with after meeting her through an online gaming site a few years earlier. He'd been harassing her from afar ever since she broke up with him.

Once in Illinois, Smirnov stuck a GPS tracker on Vesel's car and followed her for a few days before finally ambushing her as she came out of the Czechoslovak Heritage Museum, where she'd been volunteering. He shot her a dozen times. He turned himself in a few hours later, and pleaded guilty to the crime. Ladera was also prosecuted and sentenced to a year in prison.

The Vesel case is not the only murder involving a weapon procured through Armslist. In Wisconsin in October, three days after his wife obtained a restraining order against him for domestic violence, Radcliffe Haughton purchased a gun from a private seller he contacted through Armslist, after posting a rather desperate ad on the site that read:

Looking to buy ASAP. Prefer full size, any caliber. Email ASAP. I constantly check my emails. Hoping it has a high mag capacity with the handgun, ammo, accessories. I am a serious buyer. Email me ASAP. Have cash now and looking to buy now. I am mobile.

The restraining order would have barred him from buying a gun legally from a dealer. The next day, Haughton went on a shooting spree at the spa where his wife worked. He killed three people, including his wife, and wounded four others before killing himself. ATF investigated the gun sale, but no one was charged because private sales are only illegal if the seller knows the buyer can't pass a background check.

After the shooting, Rep. Gwen Moore (D-Wis.) and Milwaukee Mayor Tom Barrett sent a letter to Armslist calling on the owners to implement stronger safeguards to prevent illegal gun sales through the site. They wrote:

Federal law barred Haughton from buying or possessing a firearm after his wife obtained a domestic violence restraining order against him, he was able to avoid an instant background check by purchasing a gun through a private, unlicensed seller on Armslist.com. While licensed gun dealers are required by federal law to conduct background checks, private sellers are not. For Haughton, this lethal loophole made breaking the law to buy a .40-caliber handgun as easy as searching the internet.

Moore and Barrett asked Armslist for a meeting to discuss changes to the site. Armslist never responded. (Neither Mancini nor Gibbon responded to requests for comment for this story.)

The site may be forced to change. A move by Congress to require universal background checks would put a crimp in its business. In addition, the Brady Center to Prevent Gun Violence is representing Jetka Vesel's family in a lawsuit against the site, filed in December. But Armslist and other similar sites aren't likely to go down without a fight. They represent a significant market share for the gun industry. More than 65 million Americans have criminal records that may impede their ability to buy guns legally, and it's clear that many of these folks want to buy guns, unlike most ordinary citizens. (Household and personal gun ownership has fallen 40 percent since the mid-1970s, just as hunting has also declined in popularity.) Since 1993, roughly 1.7 million people have been denied a gun sale because of background checks, and about half of them were disqualified because they had a criminal record. These folks make for a perfect market for online private sales.

Armslist and other online sites are also a critical component of the mainstream gun industry that insists it only caters to legal buyers. Here's why: Guns bought legally from licensed firearms dealers can be resold through online ads with big markups to people who can't pass background checks. Like Smirnov, desperate people who can't pass a background check are willing to pay a premium for an anonymous transaction—a problem that legitimate gun owners complain about after using Armslist. They grouse that the site features highly inflated prices for used guns that could be bought cheaper new at Walmart.

There's good money to be made in selling guns to people without background checks. In 2010, former FBI agent John Shipley was sentenced to two years in prison for working as an unlicensed gun dealer, buying and selling guns online. Shipley bought dozens of guns, many of them legally from licensed dealers, and then resold them online for more than $118,000. One of those guns, a .50-caliber Barrett sniper rifle, later turned up at the site of a narco-trafficking-related bloodbath in Mexico.

New York City Mayor Michael Bloomberg, who initiated the undercover investigation of online gun sales, has been calling for mandatory, universal background checks for all gun purchases for years, especially for those brokered online. At a Senate hearing on gun violence Wednesday, NRA head Wayne LaPierre scoffed at the notion that such a move would deter criminals. "Let's be honest," he said. "Background checks will never be universal because criminals will never submit to them."

But John Feinblatt, Bloomberg's chief policy adviser, contends that internet sales have increased the need for background checks. The market for internet guns is increasing exponentially, he says, noting that a year after New York conducted its undercover operation of online gun sites, the number of guns offered on those sites had exploded by 68 percent. "Just as gun shows have been a problem because criminals know they can buy guns without detection, the internet is a place where criminals, felons, and other prohibited purchasers can find a weapon," he notes.

"People who want to go undetected go to places where they can be anonymous and there are no background checks," Feinblatt says. Without universal background checks even for internet sales, "we're basically giving a free pass to criminals."