It has now been confirmed that Sunday night the French Foreign Legion conducted an air assault in Mali, parachuting into the northern suburbs of Timbuktu.

Other French forces control the south, while indigenous troops native to Mali attempt to hold the east and west. The Al-Qaeda linked fundamentalist rebels who have held Timbuktu for ten months are now attempting to “squirt” out of the city and bypass rings of roadblocks set up by French and Malian troops.

And the award for ugliest service rifle goes to…

The last time the Foreign Legion performed a combat drop was also in Africa. In 1978 they dropped right into the middle of enemy held territory in Zaire to fight the battle of Kolwezi. At that time the standard issue service rifle was still the aging MAS 49/56, a semi-automatic rifle holding only ten 7.5x54mm cartridges. Although a sturdy rifle with good accuracy and reliability in harsh conditions, it hardly offered overwhelming firepower.

And the award for ugliest service rifle goes to…

Many of the Foreign Legion troops opted to sacrifice the range of the MAS 49/56 in favor of greater firepower, and deployed to the Kolwezi mission carrying MAT-49 submachine guns. Holding 32 rounds of 9mm ammo and firing at 600 rounds per minute on full auto, effective range of the MAT-49 was limited to 100 yards or so, but since the Legion was dropping right into an urban area where house to house fighting was likely, the benefits of the MAT-49 outweighed the disadvantages.

During the firefight that began even before the drop was completed, French snipers killed ten rebel soldiers from distances of around 300 yards with the FR F1, a brand new sniper rifle based on the old bolt action MAS 36 and chambered in the same 7.5x54mm caliber as the MAS 49/56. Surprisingly little is known about the FR series of rifles here in the United States, but they are said to be well liked and durable, if a bit heavy (over 11 lbs).

FR F1 sniper rifle was ahead of its time when introduced in the 1960s.

Fast forward 35 years and some equipment has changed quite a bit, but the precision rifles haven’t. French troops are now deploying to Mali with the FR F2, which is the same basic sniper’s rifle rechambered in 7.62 NATO and otherwise modernized with modern optics and a thermal shield covering the free floated barrel. The old service rifles and submachine guns have all been replaced by the bullpup FAMAS, known as Le Clarion or “The Bugle” by the troops. The FAMAS is an older gun now, but well proven. Holding 25 rounds of 5.56 NATO ammo, it fires in semi-automatic, three round burst, or fully automatic at a rate of 900-1000 rounds per minute. 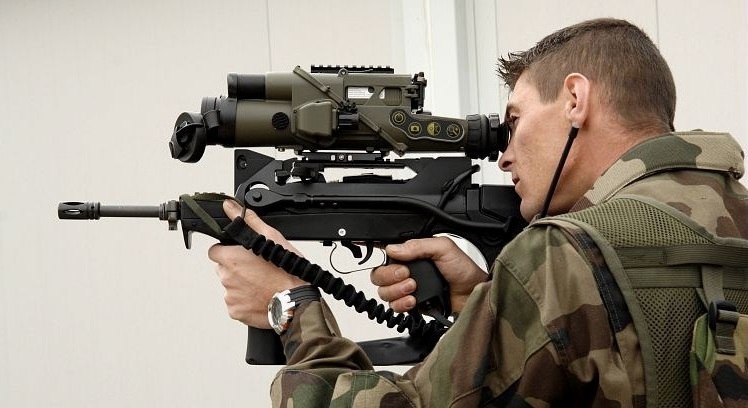 The FAMAS is also an integral part of the Felin system, which mounts a day/night imagery unit onto the rifle and pipes the picture to a monocle mounted on the soldier’s helmet. Unlike the USA’s abortive Land Warrior project, Felin is not a prototype but is actually deployed and proved very valuable in Afghanistan. A big fight may be brewing in Timbuktu, and the Felin equipped FAMAS rifles represent a real advantage over the iron-sighted Kalashnikovs of the fundamentalist opposition forces. 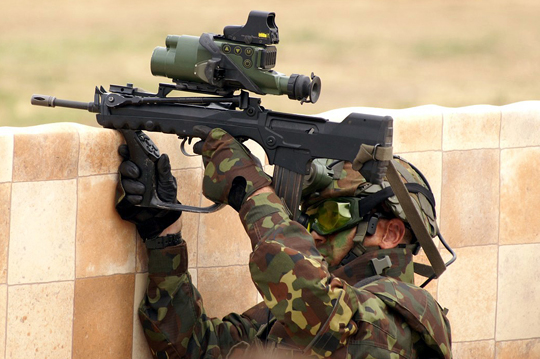 Felin equipped FAMAS rifle in action. Works just as well in the dark.

The Foreign Legion have come a long way from having to choose between a ten shot rifle or a 9mm submachine gun. How the new rifles fare in house to house fighting in Africa, the world may soon know.