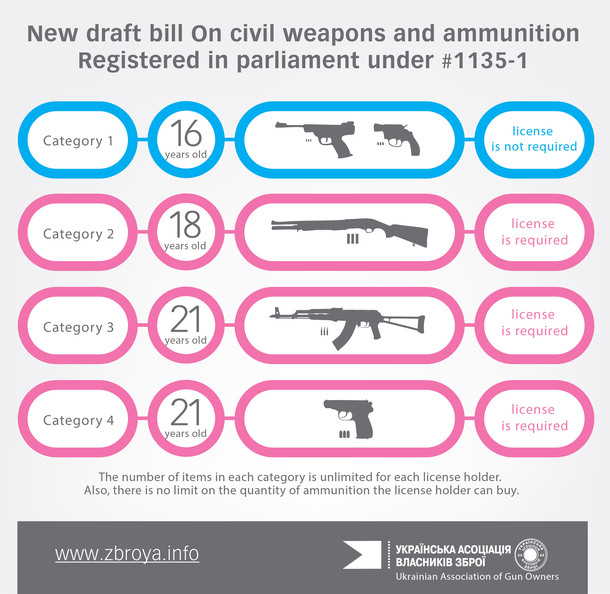 There is a growing move in Ukraine's new parliament to relax rules on gun ownership in Ukraine, and even allow license-free ownership of some types of weapons.

A draft bill suggesting new rules of ownership was filed to parliament on Dec. 10 by a cross-faction group of 31 deputies.

The main points of this bill are spelled out in Article 4. This is its unofficial translation. The full text in Ukrainian, as well as accompanying documents, can be found here.

The following categories of civil weapons and ammunition are allowed for circulation and ownership by individuals, business entities and shooting sports organizations in Ukraine:

1. The first category is air guns of caliber 4.5 mm with a muzzle velocity of 100 meters per second, and weapons fit for using flobert ammunition of caliber up to 4.5 mm.

3. The third category is long-barrel rifles, hybrid firearms and ammunition for it.

The weapons of the first category, as well as other inert and deactivated weapons, are allowed for free civil circulation.

Non-primary parts of civil weapons and additional equipment are allowed for free circulation.

License holders for each category of the weapons are allowed to buy these weapons and ammunition in unlimited quantities.

All limitations regarding detachable and fixed magazines for civilian weapons and use of additional equipment shall be determined exclusively by laws regulating certain activities related to civilian weapons or by the sports competitions regulations.