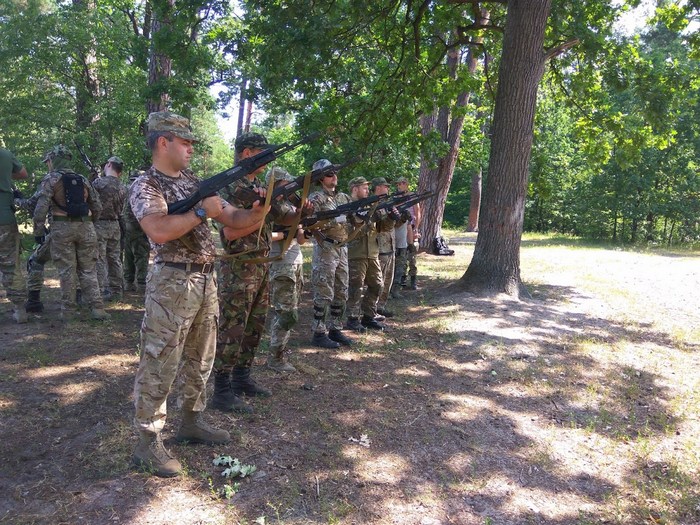 Responsible citizens are ready to defend the country

In 2014, Ukrainian people rebelled against corrupted government of Russian puppet «president» Victor Yanukovich after his denial of pro-european course and new, pro-Russian course, that would led to loosing of Ukraine's sovereignty and independence.

Followed by failure of Yanukovich, Russia has launched military assault on Ukraine's Crimea. Shortly after annexation, another military action in Eastern Ukraine was made. This Russian aggression includes full spectrum of offense from cross-border artillery shelling, air-to-air strikes of Ukraine's planes, direct invasion of Russian army, tanks, artillery, anti-aircraft missile systems (one of which later shot down Malaysian Boeing), to political, economical, humanitarian pressure, terrorism and murdering of Ukrainian activists.

Ukrainian army was largely weakened by corruption and direct sabotage of both its leadership and the government, by lack of modern equipment, training, by strategy based on world war I at best. Seeing that war is knocking in everybody's door, many volunteers and patriots arose to help the army. Some of them, seeing that army isn't capable of proper military training, or led by patriotism, or simple need to protect their homes, neighborhoods, friends and families, joined across Ukraine in patriotic organizations of military training. One of the largest of such organization is Ukraine Legion.

Ukraine Legion is a non-government organization dedicated to military training and tactical medicine. It has three courses of different difficulty. Currently, around 3000 Ukrainians received Legion's training. Many of them bravely serving or served in the Army and National Guard. The greatest goal of Ukraine Legion is a creation of territorial defense reserve army based on Israel reservists system, Estonian Kaitseliit, Switzerland reserve army.

That system should include reservists from every city to train in free from work time (weekends) in stable military units, united by territory, that they know, where they live and where they could be mobilized fast in case of full scale war or terror threat. Territorial defense has many advantages: it is much cheaper than regular professional army. To put simply, Ukraine just can’t afford colossal number of regular army equal to Russian army, and the only solution to this is territorial defense. You can have reserves in every place, rather than the need to bring troops across country chaotically. Level of reservist, that has one or two days of practice in a week, is higher than level of just mobilized and send to fight after two weeks of training soldier.

In order to have ability to quickly mobilize reservist forces, reservists need the right to keep their weapons and ammo at home. This is one of the basics Ukraine Legions stands for, as well as right for armed defense and liberalization of small arms market. How can reservist join the fight in zero hour, when his weapon and ammo stored in some storage, that can be sabotaged, bombed, blocked? In situation of total chaos, can weapons and ammo be really distributed to reservist soldiers? We doubt it.

The right of armed defense is one of the fundamental rights, and in our opinion it cannot be taken away or banned by government. As US Marine Joshua Boston says to senator who was assaulting gun rights, and we agree with that, «I will not register my weapons should this bill be passed, as I do not believe it is the government's right to know what I own. Nor do I think it is prudent to tell you what I own so that it may be taken from me by a group of people who enjoy armed protection yet decry me having the same a crime. You ma'am have overstepped a line that is not your domain. I am a Marine Corps Veteran of 8 years, and I will not have some woman who proclaims the evil of an inanimate object, yet carries one, tell me I may not have one. I am not your subject. I am the man who keeps you free. I am not your servant. I am the person whom you serve. I am not your peasant. I am the flesh and blood of America».

Want to join us?

Want to help us with improving of our material base and instructors?